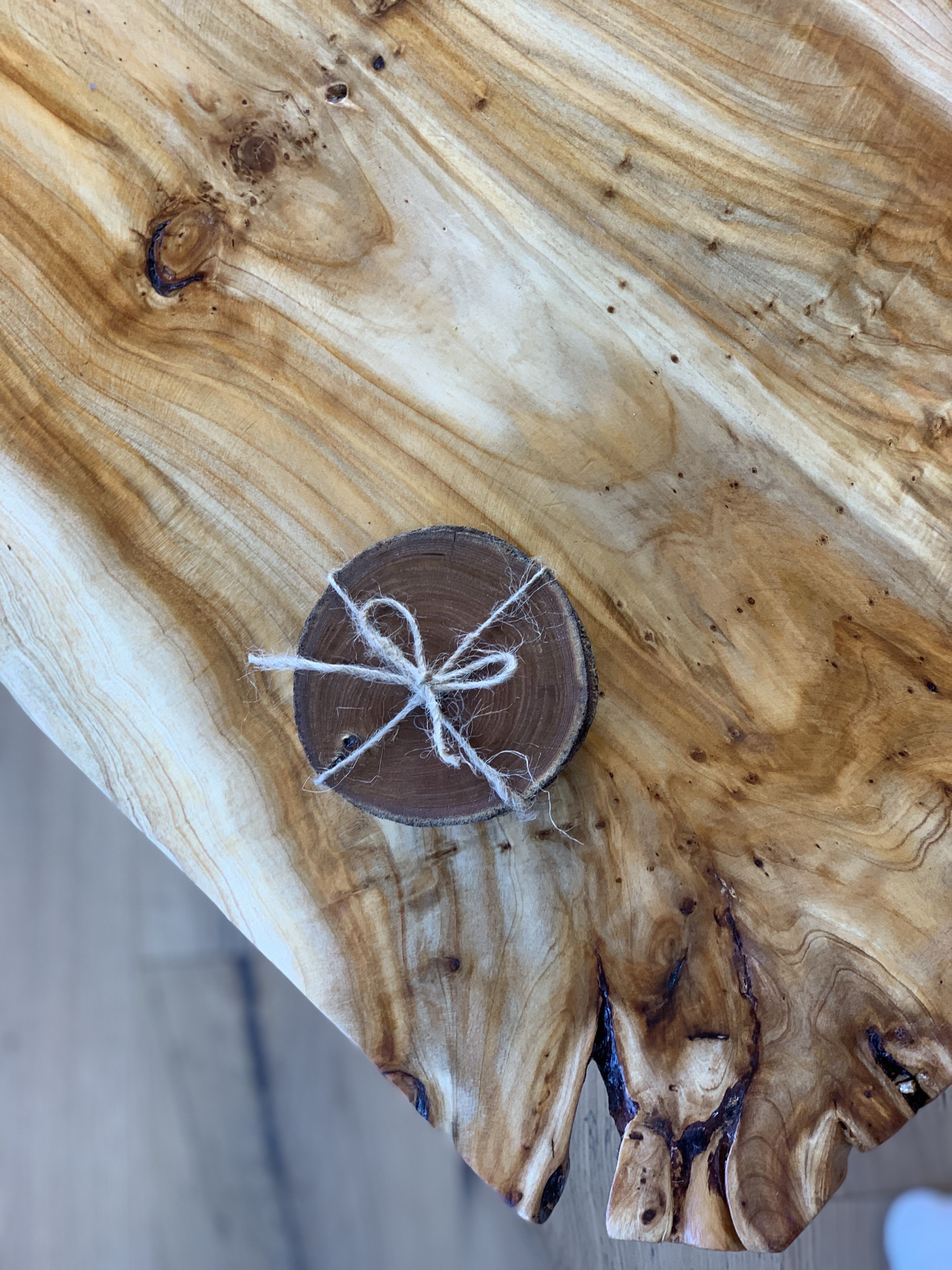 The inspiration for Timber Coin Coasters comes from a legend that started along a winding gravel road fittingly named Hardscrabble. In 2018 our young family made a new friend with a farmer down the road from us on Hardscrabble. One short year later we lost our friend to cancer. The year of friendship on that rocky road is a story all on its own. I wrote the following creative short story for my boys; Blake and Hudson to serve as a fond memory of our dear friend and neighbor. I know they will always hold the friendship affectionately in their childhood memories.  – Andrea

“You boys keep looking around in that timber and maybe you’ll find the buried treasure.” Dave was so tall he had to lean down to talk Cint’s 5 and 7-year-old boys as they stepped out from the mule into the thick timbered area. Sticks leaves and plants covered the ground. “what treasure?” Blake the oldest boy asked Dave looking up with interest.

Dave took a slow thoughtful breath as he glanced around the timber. He had been longing to visit this area of the timber for decades but there without a culvert and no time to mess around with building one while Dave was fighting prostate cancer and trying to keep his father’s farm running.

Blake was eagerly waiting to hear and impatiently asked again for his response to his question. “what treasure, Dave?

Dave grinned remembering the story his Dad had told him when he was Blake’s age. He kept his voice soft as he whispered to the boys, in case there was anyone lurking in the woods.  The boys listened intently.

“Well, when I was a boy my dad always told me that there had been a train robbed nearby and the train robber ran into these woods and buried his gold that he stole from the train in these hills somewhere.”

Blake and Hudson’s eyes went wide and they turned to look around in the thick timber woods at all the possible land that could be holding treasure.

“Did they get em?” 5-year-old Hudson asked; he was thinking more about the train robber than the buried treasure.  Dave’s grin was wide despite the weight loss and sunken face from the chemo. Dave knew that Hudson would be more adventurous in the timber if he was confident the “bad guy” had been caught. Even if the story was 2 or more centuries ago. “Oh yes, they locked him up good, but he never told anyone where he buried it. Maybe you boys will find it.”

Hudson picked up a tall smooth stick that had been drying on the ground for a long time, it was taller than him. He handed it to Dave. “here you go Dave; a walking stick!” The boys had been in the timber with Dave before. They knew he was sick from cancer and he moved a little slower through the woods when they were with Dave compared to when they were only with their dad. But they also knew that his weakness wouldn’t stop him from doing anything that he wanted to do. And being in this timber was something he had been wanting to do for a very long time.  “Thank you,” Dave said taking the stick from using it to take a few steps into the thick timber. The two brothers set off up the thickly overgrown hill navigating over fallen trees and around patches of thorny bushes. Clint and Dave watched them head off and could hear them talking with excitement about the possibility of finding buried treasure.

Clint watched Dave as he took in the sights, sounds, and smell. Without words spoken there was knowledge between the two of them that making it to this side of the farm was a gift.

The two adult men followed the two boys through the timber staying enough of a distance away to give the boys some adventure but still be able to see and hear them.  “They are pretty excited about that treasure,” Clint commented to Dave.

Dave nodded his head, “sure would be nice if they could find something.” They both smiled and laughed at the impractical idea.

Clint had an idea. He walked back to the mule and took out his chain saw he had to use to help move fallen trees out of the way to make the path into the timber. He walked over to a tree that had clearly been laying on the ground of the timber for years. With a strong pull, he started the chainsaw. The quite timber roared as he sawed a branch off of the fallen dried tree. With a few careful passes, he had cut 4 round pieces from the inner branch the size and thickness of a mason jar lid.

“Coins!” Clint said as he picked up the flat round piece of dried red elm and handed them to Dave. “Yes, Timber Treasure,” Dave said with a big grin.

They are these timber coins that the boys found in Dave’s timber and share with you today.  They are taken back to Clint’s shop and finished with a clear coat to protect them for years of enjoyment.  Each Timber Coin is harvested from Dave’s timber from Red Elm that has fallen and died.  No live trees are ever used in the production of the Timber Coins.

We hope you enjoy your timber coins as much as our boys enjoy scouring the timber for the real treasure.  When you hand your friend one of our Timber Coins, we hope you share the story of the train robbers who buried treasure in timber in Iowa and the two little boys who found Timber Coins in their friend Dave’s timber.